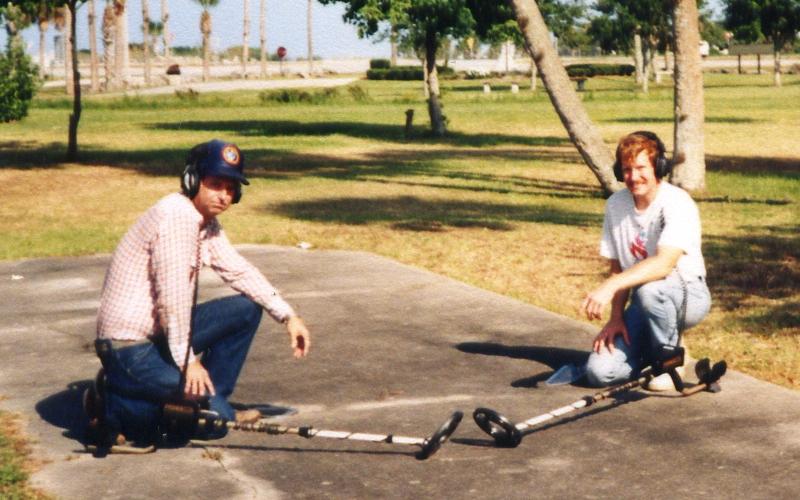 About 4 weeks ago, Mike recommended a park in Titusville, Florida that we should hunt. I am an extremely positive person, yet I complained to him about something that I have always preached the exact opposite about. My complaint: I have never passed by this park without seeing at least a minimum of one THer hunting this park. I pass by this park every day after work so I think I could safely say that this park has been hunted over 1000 times. Mike had just purchased the identical top-of-the-line Fisher detector that I have and after some schooling in my test garden and validating the new detector, I accepted his offer to hunt the park. In a short period of time, Mike and I would come to realize the importance of my test garden. The park is about 110 years old and consists of approximately 10 acres of land. Upon arrival to the park I analyzed the soil conditions and rendered 9 of the 10 acres undetectable for various reasons. I knew that only about an acre had potential to produce. In time, this proved to be correct. Mike wanted to watch my techniques for a few minutes before he commenced. In 4 minutes, I pulled 3 mercury dimes at the 10.5 inch calibrated depth mark (graduated shovel). Mike was done watching! He put me to work in one area and he went to another area. In just a few minutes he came running over to me with an 1888 Indian. A few hours each day and several days later, this particular acre produced 3 Indians, 2 Buffaloes, 37 Mercurys, 1 Washington, 1 standing Liberty, 2 Walking Liberties, and several dozen early wheats. Ironically, nothing came out of the ground from 0 to 8 inches. This credit goes to all the other THers. Everything was at the extreme fringe capabilities of these detectors. Mike was startled with the performance of his new detector. Of course, we work “by-the-book” with the coil parallel to the ground lightly scrubbing the grass, slow, methodic, overlapping sweeps and if the natural landmarks are poor, we even use colored plastic spikes to segment small areas at a time, never loosing track of property.

We did encounter one problem that I was partially aware of. When Mike and I were within 120 feet of each other, both of us stopped finding deep coins. This happened twice, and after the second time it resulted in an immediate departure of the park to my test garden. My hunch was true. I had Mike turn on his detector and stand 75 feet from me. My unit was quiet and stable, however I could not detect my shallowest dime at 7.75 inches deep! Since the United States dime has become the national standard test target for a metal detector, this is what my test garden mostly consists of. When Mike walked back to a distance of 110 feet, I could detect the shallowest dime. When Mike turned off his detector, I could consistently detect my deepest dime buried at a calibrated depth of 11.2 inches. This was a severe problem that both of us were glad to identify because neither one of us had any idea that the detectors were quietly operating at a reduced performance level.

The next several hunts with Mike, I yielded the most finds. This happens occasionally. We are both aware of it. Of course I had to play it out that I was better than him, consistently. I knowingly, in time, would be proven wrong. The time? In 2 days!! Mike went out of town for a 2 day weekend. Unbeknownst to me, Mike, hiding his obsession, brought his detector with him. When he arrived home, he immediately called me. He could hardly talk. I never noticed because I was so excited about telling him about finding what appeared to be my first Civil War button. I came over to Mike’s house to brag, still under the assumption that Mike had a detectorless weekend. Shaking, I handed Mike the Civil War suspect.

At first, I did not know what I was looking at. In Shaking, he handed me a Ball jar. I, ever so happily, accepted my defeat, cache settled! I consider this cache find to be the largest treasure hunting find I have ever witnessed. Finding an expensive piece of jewelry on the beach is one thing, but finding a cache is an entirely different ball game. Mike took a tip from a friend who has a lawn service. This person exclaimed to Mike about a piece of abandoned property near Orlando that had about a foot of ground a few seconds, I collapsed to the floor opening the Ball jar on the way down. In all of Mike’s 27 years 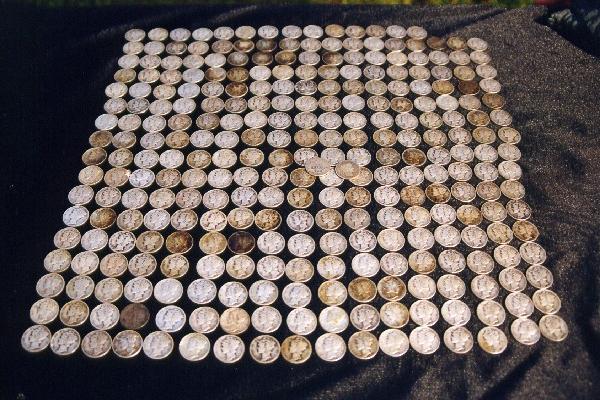 of treasure hunting, he has never found a cache. Now, in a fairly big way, Mike destroyed that track record. I dumped out 287 silver dimes. Two Barbers and 285 Mercurys. removed, including the old 1920’s house! Mike saw opportunity. He detected for about an hour and found nothing. Rechecking his controls on the detector to ensure optimum performance – or any performance for that matter, Mike received a large target sound. Certain it was a soda can, he passed the coil over the target at different heights above the target. Two feet above the ground, it was still a deafening signal. The detector’s performance was confirmed flawless. Mike was bored. He had heard absolutely nothing in an hour and consequently his shovel never saw dirt. Out of boredom, he dug. At just over a foot, Mike felt a solid object and widened the hole. Knowing people used to bury their trash all the time in the backyard, up came an old dirty Ball jar, intact. Caked with dirt, Mike was not alarmed. Until, he shook the jar. Silver has a highly distinguishable discrete frequency. AND THE REST IS HISTORY!

By Thomas Dankowski and Michael Holman

HOT new optional coils are soon heading out the door at First Texas! I’ll be posting a full review of the 5″ F5 coil and an AMAZING 11″ DD coil for the Tek Omega…and be prepared for some shocking statements…

Posted originally at www.findmall.com by Andy Sabisch Andy Sabisch is an avid detectorist, writer and reviewer who has contributed to the hobby for years.  I ran across this post over at Findmall.com, one of the largest detecting hobby sites on…

I knew that Engineers at First Texas Products have been working on several new accessory coils for their Fisher and Teknetics line.  Here’s the list of either what’s “out” or soon will be… The Tek Titanium series will have: (Alpha,…

Welcome to WordPress. This is your first post. Edit or delete it, then start blogging! Test of functionality