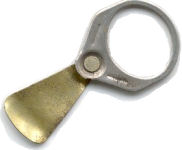 It seems that every time I go hunting, I can never just simply ‘hunt’ and enjoy a basic coin-shoot. Rather, I always turn it into a research project or a experiment. This usually includes spending large amounts of time recovering many ‘trash’ signals. Occasionally, my hunting partners will wax me in the volume of “keeper” finds, then commence boasting – to playfully ruffle some feathers.

It was late in 1999 when I took on such a project. My quest was to find; “At what depth was the 1962 dirt strata”. This was the year that a detectorists nightmare debuted; the aluminum pull-tab. — Thousands of targets were dug and depths were carefully measured. Initially, I thought that it would be the coins (because they are dated) that would give the best and most conclusive data for dating the depth stratums — especially from the coins that were nearly uncirculated when they were lost. However, unexpectedly, the pull-tab with its many differing varieties provided the most precise data. Some certain style pull-tabs had a life-cycle of only a few weeks. It is safe to assume that these specific pull-tabs were lost during their active life-cycle; a 8 month old RC Cola may not taste so good — expiration date aside. The sink-rate of differing density metals must be taken into consideration along with ground moisture, cumulative foliage, grass root structure, dirt density/composition, ground activity and any other data altering occurrences, so as to remove as many variables in order to ascertain quantified research validity.

Conclusive analysis was achieved in May, 2000. The 1962 strata of dirt was located at 9.22″ deep. Several places in Florida, Georgia and California supported this data. In some areas, the sink rate was worse and in other areas the soil provided greater stability with the older targets being located at shallower depths as a resultant. This sink-rate data represents the median average. At the time of this writing (April, 2006), I surmise the 1962 median average soil strata is at approximately 9.5″.

What good is this data? Well……. many decisions & conclusions can be formulated with such information. In bullet form:

* Use a deep seeking unit.
* Find areas where soil has a slower sink-rate.
* Recover only the deep targets under these high sink-rate conditions.
* Use a large coil in areas where targets are sparse.
* Recover the pull-tab signals at the pre-1962 dirt depth strata’s.
* New England States are lucky! (Slower sink-rate dirt).
* Sink-rates can vary dramatically from site-to-site and State-to-State.
* A superior detector may not be the answer.
* You may experience that 9 out of 10 places you hunt will produce nothing old
— only clad coins at deeper depths.
* Promise yourself NOT to get discouraged.
* Accept the fact that many premium looking, ‘prime sites’ have sink-rate soil
failure conditions.
* You may experience conditions where dirt mineralization is so severe that even
the top performing detectors, multi-frequency or otherwise, may not be able
to detect a coin exposed on the surface of the ground.

Like all things in life, ethics should dictate our behavior as metal detector hobbyists.  This is “universally accepted” ethics list observed by most in this hobby. I WILL respect private property and WILL NOT trespass without the land owners permission….