On a recent sunny and slightly cool Tuesday, I decided to play hooky from work and try out my newest acquisition. I just purchased a new Minelab SD2200d metal detector. I had so much fun on that memorable Tuesday that I just have to share the excitement. With certainty, I am not trying to promote Minelab, although I must say that I am in shock by its stupendous performance. It is not a toy. On the beach, its performance is truly above all others. Although the Fisher CZ is still my favorite metal detector, I will let the performance and the finds of the SD2200d speak for itself.

On this particular Tuesday morning, I arrived at a Florida beach only to find 2 other detectorists methodically hunting my favorite trough. Disappointed, I marched down the coast a few hundred yards. I dawned the somewhat uncomfortable battery backpack and powered up the new detector. Instantly I found a rusted bottle cap. Then a pulltab. Then another pulltab. Then I found a tiny gold earring retention clasp smaller than a BB from a BB gun at approximately 4” deep. Then a zinc penny at 14” deep. Then another on the surface. A rusted fishhook soon followed. Instantly gaining respect for the detector, I continued on. Chirp, chirp. A small gold, heart shaped ring 13” deep and weighing in at 1 gram was an exciting score.

Now I had an audience. The two other detectorists no less! They had been watching me, unannounced, for a few minutes. Their attempt of quietly spying on me subsided when one of them audibly squirmed when gold was struck. Feeling obligated to introduce themselves after blowing their cover; I now have two new friends. But not until after they both chuckled at my customized, graduated (in inches) shovel.

After a short show-and-tell session of sharing our finds, the two men invited me over to where they were hunting – only because I put my foot in my mouth. I exclaimed to them that I find what all other THers left behind! After that bold statement I quietly prayed: “Minelab don’t let me down”! One of the THers did find a gold wedding band and a silver pendant with his Minelab underwater unit. This is one of the reasons why his curiosity piqued when he laid eyes on my Minelab.

Walking in their exact footprints I immediately found a rusted bobby pin at 7”. The two men laughed. Then a rusted screw cap at 16”. They laughed again and claimed that I did not know how to use discrimination. Through embarrassment, I quickly realized how handicapped I was by learning what the definition of ‘surface discrimination’ is that this SD2200d employs. Just about everything I found on the beach was well out of range of the detectors discrimination capabilities. Another rusted fishhook accompanied by laughter. Then at 19” deep, resting on the hardpan, a woman’s diamond engagement ring of 14KT gold came out of the wet sand, followed by laughter. MY LAUGHTER!

Then the detectors threshold hum muted, indicating surface iron. I dug the object anyway, exclaiming this target is iron. This was the first time that I encountered the very limited surface discrimination capabilities of this particular detector. The surface discrimination worked properly. By the way, the “double D” coil is the only coil that will engage the surface ID circuitry. The monoloop will give about 4% greater depth but the limited ID circuitry becomes severely handicapped without the double D coil. Please understand that this is a leap in technology to even have this ID option with pulse induction. It’s a little crude, but it’s a first! Who knows what the future holds! (Kudos = Bruce Candy)!

What was the iron object recovered? How about a beautiful, perfect, functioning Swiss Army stainless steel pocketknife! Not all iron objects are bad.

Chirp, chirp. A nonferrous pulltab. Chirp, chirp – another pulltab at depth. This gained the two guys’ attention (and respect) as they were discriminatinating out only the iron and recovering all nonferrous objects. Now I was given specific instructions to mark each target with an ‘X’ in the sand and allow them the opportunity to pass their coils over my targets as it now became evident that it was no longer a coincidence of a large volume of missed targets by their machines. This portion of the testing concluded that I had minimum 85% greater sensitivity over their machines.

The first target that I marked for their analysis turned out to be another gold earring clasp at 6” deep. A gold cross earring at 9” was the fourth ‘X’. A few more foil/pulltab trash items followed by a gold heart-shaped locket at a depth of 11” – laughter ensued. Finally, an apology and a pat on the back for my graduated shovel idea.

Another gold ring, with initials, was picked off of the shell/gravel hardpan at 19” deep. AGAIN, another 14KT gold dolphin ring pulled from the hardpan. Then an 18KT gold pendent of Mickey Mouse at 14” deep. It’s obvious that gold likes to collect in localized pockets on the beach. I have a gut feeling about these very successful finds being indicative of future results. Especially if I can continue to find the hardpan!

Three men walked away from the beach astonished! Yes, I dug a fair amount of trash with the pulse induction machine, but all in all, I walked away with 5 gold rings, one silver ring, a gold herring bone bracelet, several earrings and a large handful of clad coins. This is the most success that I have ever had in one day. I have always dreamed about this type of success! 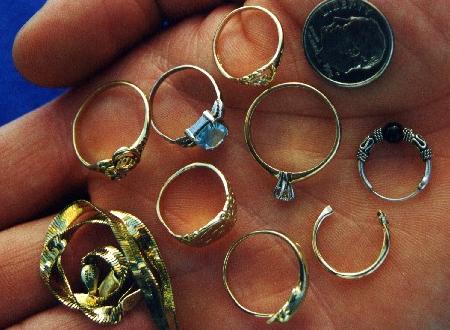 One good thing about small iron objects in the salty ocean environment is that they will rust and disintegrate in a very short period of time. This is why the percentage of iron objects found on the beach is substantially less than of those found inland.

I must say that I am startled at just how much people lose! I’ve even had people laugh at the hobby and proceed to tell me that I will not find anything of value. Jaw’s drop when I pull out of my pocket a small handful of glittering gold. Suddenly, TH’ing becomes one of the most interesting hobbies they have ever been exposed to. Laughter of humiliation becomes laughter of giddiness. It’s got to be one of the neatest things to watch a full grown adult metamorphically transform into a child, starry eyed, glittering with fantasy. Total nirvana is acquired when a person witnesses the actual digging and recovery of a studded precious metal from the depths of the wet sand. If only I had a dollar for each person I’ve recruited into this world of fascination!!! 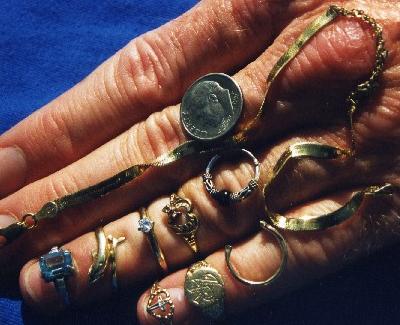 When it comes to “SMF” (or simultaneous multi frequency) there have been a limited number of players over the years. The Fisher CZ line of detectors, Minelab (Sovereign, Explorer, etc), Whites (with the Vision/V3i) and recently XP with the Deus…