In part 2 of my ongoing review of the technologically advanced White’s Spectra V3, I was originally  going to cover the cool wireless headphones…however, after a trip to the beach for vacation I switched gears and decided to talk a bit about the Spectra V3 as a beach hunter. So here we go…White’s Spectra V3 review #2… Beach Hunting!

Beach hunting is one of my favorite things to do!  The problem is that I only get down to the coast once or twice a year.  Since my time is limited, I tend to take several pieces of metal detecting artillery with me!  This year one of those hunks of metal detecting weaponry was the new White’s Spectra V3.  The one I have is still called a “Vision” (complicated legal issue involving names!)…but it’s the same machine.  Now, the Spectra is one of those detectors that you look at and KNOW it will do some amazing things…be it inland on old coins or down in the wet sand.  The Spectra can utilize 3 separate frequencies simultaneously and comes stock with a 10 inch DD coil.  It also has a TON of stock pre-built “programs” or modes that you can select on the fly (Much, much easier than on the DFX I used to have) thanks to a quick “hot bar” arrangement along the bottom of the screen.  There’s also nearly UNLIMITED user adustable things under the hood…so many so that most new owners will “play it safe” with the stock programs for a while…and luckily, they work great!…not quite as conservative as I remember on the DFX.  For the “turn on and go” type hunters…no problem!  You only “play” with the advanced stuff if you want to…and luckily all the pre-made programs hard in uneraseble ROM…so a quick reset and you can “undo” whatever you did if something ends up out of whack.  In other words…don’t be afraid to “play”!

Unfortunately, low tide during vacation week was mid -afternoon (or EARLY in the morning!).  However, I love to hunt the “wet stuff” during waning tide, so off in the mid-day heat I went!  I was already familiar with the Spectra’s sand performance during a brief surf hunt earlier in the Summer…that short trip netted me a pocket full of clad and a ring!  My hopes were HIGH for this week!

When I started my hunt, I quickly picked the preconfigured “Salt Beach” mode.  It’s an exellent starting  point for salt drenched sand…and sets the cool color display to a mode that is highly visible in the bright daylight.  The 10 inch DD coil covers ground quickly and the presets of the “Salt Beach” mode seem to allow for fast hunting.  The only tweaks I made initially was bumping the gain…I found the area I was in allowed for a bit more “heat” while staying stable.  The balance of the “tried and true” White’s pole, display pod and electronics housing makes it easy to find a perfect balance.  I’m around 5′ 11″  (used to be taller before years of gravity got me!) and had no problem finding a notch on the  pole that allowed for that perfect compromise of maximum swing coverage, yet little “fatigue”.  I tend to opt for more swing coverage, using the momentum of my swing to help suspend the coil “just” off the surface of the sand.  One minor issue I had with the stock DD coil was a slight “falsing” when bumping the wet sand…I’ve heard this issue does not occur with other compatible coils though…and I adapted quickly to compensate.

One thing is for sure…other hobbyists are “intrigued” by the new Spectra!  I had quite a few folks (including some of the Carolina Beach area CRABS (Carolina Relic And Beach hunting Society…the “h” in hunting is silent! 🙂 )  They are an awesome group of hunters who I thoroughly enjoy digging with every chance I get!  And…giving credit where credit is due, the big ol’ orange handled scoop you see me with in the photos was a loaner from the generous Carl Cladoff! (I forgot mine at home!)

One thing that INSTANTLY grabs attention is the wireless headphones!  It was almost bizaare hunting without a cord dangling by my noggin!  Especially when I stopped to dig the many targets…I usually have to do a little arm scoop motion to move the headphone cable so I don’t tangle it in my scoop as I dig.  In short…the wireless headphones ROCK!  Comfortable, wireless and plenty of volume.  There were a few unusual episodes of the audio having a left/right shift (kinda like when you adjust the balance on your car stereo) but nothing that was a problem at all.  I think I’ve seen on the forums that there’s a software update that prevents this.  However, I kind of like it!

My intial finds with the Spectra V3 were plentiful!  Plenty of targets were heard…at all sorts of depths.  The deepest I dug was over a foot on a quarter…and it was loud and clear.  The Spectra achieved PLENTY of depth on the Carolina Coast!  Sensitivity to gold was tested with my wedding band.  The Spectra hits HARD on gold rings…I just wasn’t luck enough to walk over one during the week.  However, the Spectra has scored two rings for me in the sand.  Neither was particularly valueable, but still fun to find!

Another thing the beach taught me about the V3…it’s pretty darned water resistant!  I was caught in SEVERAL downpours…with nowhere to go!  There was never a problem with moisture getting into the “innards”…see my earlier Spectra V3 Review (part 1) for a photo of the rubber seals around the display pod and the electronics housing.  I also noticed the V3 seems to handle a variety of temperature swings without an issue.  My Wife likes to keep the Condo COLD!  When coming from the frigid inside to the hot and humid outside, no problem…something else…See those buttons on the display?  They glow in the dark!  Nice touch!  I have to admit…when I first heard the V3 would have a color display, I was worried about visibility in bright daylight.  However, my concern was unfounded.  The display is excellent in both bright light and NO light.  The backlight (which is adjustable) works great when you want to get in some night hunting.

Another cool feature I learned to appreciate on this trip is the rechargeable battery pack.  It charges fast!  Great when you want to “top it off” after a hunt.  The reason I say “top it off” and not “recharge” is because the battery life was splendid!  It lasted much longer than I did!  Just in case though, there’s an extra battery pack that you can carry with standard AA batteries.

When all is said and done, the White’s Spectra V3 is a great beach machine!  The default, out-of-the-box Beach Hunting program works well and there are more adjustments than the average hunter will ever explore!  However, it’s pretty cool knowing that flexibility and adjustability are available at your fingertips.  I think White’s has another hit on their hands with the Spectra V3!

*Special thanks to Dave and Carl Cladoff for the use of their photos!* 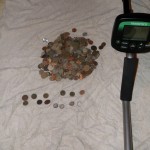 Mark Ellington www.detectorstuff.com *Review based on prototype version…subject to change!*   The Teknetics T2 has developed quite a cult-like following since its release! With good reason…It is powerful, lightweight and innovative. It is chock full of useful features that appeal… Teknetics Eurotek Pro Review 2014 Mark Ellington www.detectorstuff.com Intro – You know, the Eurotek Pro kind of frustrates me! No, no…not because it has any problems . …but, instead , because it performs so blasted well while being so inexpensive…

I Love this hobby and this website!  How often do you get to tear into a perfectly good, brand spankin’ new metal detector?   If you’re like me you’re curious about the “innards” of metal detectors but not too sure about…